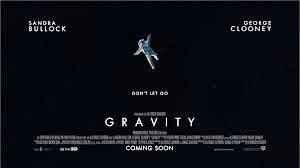 It is rare to see a science fiction film get the Best Picture Oscar, but I would feel disappointed if Gravity does not win this time. Though 12 Years a Slave is the most favoured film among critics, no film has been able to win the admiration of critics and audiences alike, as Gravity. Excelling in all aspects, viewing this film is a magical experience.

In space, no one can hear you scream. Dr. Ryan Stone (Bullock) is on her maiden voyage in space. Her job is to fix the Hubble Telescope. Accompanying her is veteran astronaut Matt Kowalski (Clooney), who is on his last voyage. They receive news from Houston that some debris is approaching them. Soon, hundreds of pieces of debris attack the shuttle, and both Stone and Kowalski are detached from the shuttle. Their contact with Houston is lost, all the other crew members are dead and both of them are just drifting into space. Whether or not they manage to get back to the Earth forms the rest of the story.

The film is actually more of a documentary, in my opinion, so there is no story. It takes place in real time, almost, and it covers the various dangers and challenges astronauts have to face, if at all they get detached from a shuttle and start floating in space. Yet, from the first minute, the film moves at breakneck pace. Of course, these sort of films will always have some scientific inaccuracy, but many people have said that Gravity is quite acceptable, despite a few inaccuracies.

Though the story takes place in space, lots of other themes appear in the story: hope, survival, solitude and other psychological effects in the mind. The film tells that no matter how deep in a mess you may be in, there is always hope.

The visual effects are awesome. The crashes and other accidents look dazzling in 2D (because I saw the film in 2D), and I am sure in 3D they would have been spectacular. All these disasters are quite thrilling to see, and you also sit on the edge of your seat during these scenes, for they appear so realistic. Another aspect that boosts the film is Price’s score. In many places, the music crescendos, and then abruptly stops, just to show the contrasting silence of space. Even when the word GRAVITY appears in the beginning, the score’s volume increases, and then suddenly stops, and the viewers experience the eerie quietness of space. His score is good in other parts of the film as well.

The settings are brilliant as well. The space shuttles, the space station are all shown on screen, and even the intricate details are shown. This, along with the visual effects makes the film a pretty authentic science fiction movie, with little bits of information about space here and there.

To sum up, Alfonso Cuarón’s sci-fi thriller Gravity is a masterpiece. Breathtaking visual effects and sets, splendid acting and a story that has a little bit of humour, science and various other elements make this film a delight for all audiences alike. The running time is just 91 minutes, but these ninety minutes are totally worth spending to watch the film. Go for it!