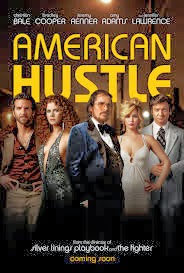 Along with Gravity, David O. Russell’s American Hustle emerged as the film with the maximum number of Oscar nominations, with ten. Somewhat based on an actual scam in the 70s and 80s, the fast-paced story, accompanied by the strong performances by Jennifer Lawrence, Bradley Cooper, Amy Adams, Christian Bale, and Jeremy Renner (in that order), make this crime-drama a solid entertainer.

Con artist Irving Rosenfeld (Bale) meets another con artist, Sydney Prosser (Adams), and they fall in love and begin a relationship. Prosser puts on a fake English accent, and helps to improve Rosenfeld’s scams. Though Rosenfeld loves Prosser, he does not want to leave his son with his somewhat psychotic wife, Rosalyn (Lawrence). Both Rosenfeld and Prosser get caught in a loan scam by FBI Agent Richie DiMaso (Cooper), but he agrees to let them go free, if they help him to make four more arrests, including that of the Mayor of Camden, Carmine Polito (Renner). Prosser wants to escape, but Rosenfeld does not want to leave without his son. So eventually, they agree to DiMaso’s deal. Whether or not the con artists complete the deal forms the rest of the film.

This is the second film, since 1985 (after Silver Linings Playbook, also a David O. Russell film), to win Academy Award nominations in all four acting categories. You want an actor to do a weight transformation and put on any costume, and perhaps even change his accent, you bring in the man: Christian Bale. Gaining an extra 40 pounds, Bale does a really remarkable job in the film, but yet, I felt that DiCaprio’s acting in The Wolf of Wall Street was better. This is Bale’s best acting performance so far, perhaps second only to The Prestige. Bradley Cooper, with his fast dialogues and humorous scenes, stuns the audience with a lively performance. Amy Adams, with her put-on English accent and a wide range of emotions has also acted very well. Though Renner comes in for a comparatively short time, he manages to make a mark with his acting. The best of this ensemble cast is Jennifer Lawrence. She is just 23, but has remarkable potential, and can become great soon. Her portrayal of the psychotic Rosalyn is brilliant. The scene where she dances around singing Live and Let Die perfectly brings out the nature of her character.

I like the way O. Russell has chosen this powerful cast: on one side you have experienced actors like Bale, Adams and even Renner, while on the other side you have upcoming actors like Cooper and Lawrence. Yet, when they act together, it enhances the film. The costumes of the actors, their hairstyles and make-up all add to the uniqueness of the cast. All the members of the cast look different, compared to the way people usually picture these actors. Danny Elfman’s score is good, and in many places, some songs are played in the background.

Eric Singer and O. Russell have written a nearly taut script. Though the opening of the film says ‘Some of this really happened’, there are a number of historical inaccuracies. But altering history has only made the story better. In many places the dialogues and the story are quite funny, despite the profanity used. The romance and a few other scenes make the film go offbeat, but Russell manages to bring the film on course in quick time. The characters are well-developed, and Russell has done well to give the right roles to the right people. The story is never boring, and is always entertaining.

To conclude, David O. Russell’s American Hustle is an excellent crime drama, with a brilliant script and scintillating performances by all the leads. Lawrence and Cooper deserve the Oscars for acting, but Bale hasn't done as well as DiCaprio and Amy Adams' performance was not as good as that of Sandra Bullock (in Gravity), in my view. In most aspects, American Hustle delivers the goods.