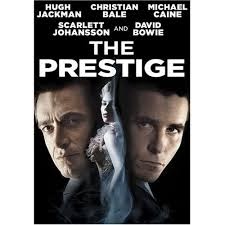 You know them better as Wolverine and Batman, but in Christopher Nolan’s 2006 film, Hugh Jackman and Christian Bale are not superheroes, but are people you and me loved to see when we were children (and perhaps even now): magicians. With veteran actor Michael Caine, Scarlett Johansson and David Bowie in the supporting roles and with David Julyan composing the score, The Prestige proves to be another treat from the never-disappointing Christopher Nolan.

The following lines from Michael Caine start the film: Every great magic trick consists of three parts. The first part is "The Pledge". The magician shows you something ordinary.  Perhaps he asks you to inspect it to see if it is indeed real, unaltered, normal. But of course...it probably isn't. The second act is "The Turn". The magician takes the ordinary something and makes it do something extraordinary. But making something disappear isn't enough; you have to bring it back. That's why every magic trick has a third act, the hardest part: "The Prestige".


The first part: Nolan shows you something ordinary. He probably asks you to inspect it, in trailers, to see if the film is normal, but of course, it isn’t. No Nolan film is ever so simple. Sometime in the 19th century, two magicians, Alfred Borden (Bale) and Robert Angier (Jackman) become friends at a magic show, when they debate over how the magician performed the trick. John Cutter (Caine), an assistant to the magician, asks them to see another Chinese man’s magic show to understand the secret about magic. As the story progresses, a magic show takes place, where Borden and Angier are called from the audience as volunteers to an escape act. The victim is Angier’s wife. Somehow, she cannot escape from the tank, because she could not untie the knot Borden tied, and so, she dies.


The second part: Nolan takes the ordinary story, and turns it into something extraordinary: a Nolan masterpiece. The two magicians become fierce rivals, after Angier blames Borden for killing his wife by tying a different knot and not what was planned. Borden becomes ‘The Professor’, and Angier becomes ‘The Great Danton’. Borden has Bernard Fallon as his assistant, and Angier has Cutter and Olivia Wenscombe (Johansson) as his assistants. Both the magicians try to sabotage each other’s acts, and aim to win the audience. Both of them attempt to master a certain trick: the transported man.


The third part: Making a film isn’t enough… you have to make it big. That’s what the third part is about. As Borden and Angier become more and more cunning and obsessed in beating the other, they realize that only trickery can outwit the other. So, each magician brings his own method of wit and wisdom, to give the audience the biggest prestige they have seen.

Another typical Nolan film is The Prestige. Non-linear narration, twisted nature of characters, a good score and great acting make this another Nolan hit. However, unlike Memento, the narration doesn’t have any pattern. In Memento, there is a pattern of narration: first the black and white sequences in chronological order, and then the colour sequences in reverse. Here, the sequences are jumbled up in no particular order, and this kind of makes it more difficult to understand. The film begins with Caine’s lines, and during this time, there are several scenes shown on screen. These obviously don’t make sense at that time, but hey, if they did, they that wouldn’t make it Nolanish now, would it? After that, the story begins with Cutter being interrogated in court, and then the story is told in the form of flashbacks through the diary of Angier.

There is no ambiguity in the end. In Memento, there is a lot of ambiguity at the end, and so how the story actually is can be decided by the audience. The only decision that the viewers have to make in this film, is to decide who is good and who is not. And believe me, that is a tough decision. There are tons of twists, that all come one after another rapidly, at the end. So, the story might seem simple most of the time, but Nolan knows just when to surprise his viewers!

Coming to the story, it is excellent. By the time you finish watching it, you will probably be as confused as you were after watching Memento, but here, there is a slight change. Follow the clues properly, and the story is as straight as an arrow: no doubts and no loose ends. And the catch? Nolan has so ingeniously managed to hide the clues that it takes a keen eye, and more than one watch to spot them. All twists are satisfying, and non-linear narrative structure adds to the Nolan touch. The film also deals with themes like sacrifice, obsession, pride, and of course, magic. How much of sacrifice and courage does it take to really perform magic? What happens when one gets too obsessed with magic? And is performance all about pride and winning the favour of the audience? The Prestige answers this all, thereby giving the audience something to think about and also providing an entertaining story.

The natures of characters are excellent. Nolan has brilliantly shown the change in the attitude of the characters from being friends, to rivals, and finally, hard-core enemies. To support Nolan, Bale and Jackman have acted brilliantly. Jackman displays anger, sadness and also the typical looks and gestures of a magician very well. Bale has also acted equally well, and in my opinion, this is his best performance in Nolan’s movies. Michael Caine has also acted very well. The dialogues are also good, and it is in the dialogues that most of the clues (I’d say about 80%) are hidden.

The period settings and details are authentic. All the costumes and surroundings and other settings related to the actual magic tricks: the stage and all that, are great to see. The score is also composed according to any magic show. The score is good throughout the film, and during the magic shows, it is even better.

To sum up, Christopher Nolan’s 2006 film is another terrific film. Great acting, great visual effects and period settings, and a terrific story with plenty of Nolan touches, make this one of the best films of this decade. This may be a lesser known film of Nolan, but yet, it deserves better recognition. After watching it, you will realize that it is neither Angier nor Borden, but Nolan, who has given the audience a grand prestige.