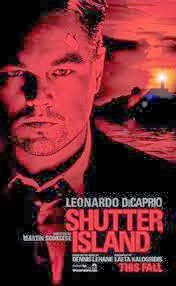 In Shutter Island, Martin Scorsese provides a horror-thriller with a fair amount of mystery. Unlike his other pretty straightforward films, Shutter Island takes more than one watch to understand the plot. So, basically, this film is a mix of Scorsese’s thrills and Nolan’s ambiguity. Other critics who have seen Scorsese’s more recognized films like Goodfellas, Taxi Driver etc, have said that this film does not rank with his best, but I found this one pretty good.

The story, set in 1954, takes place in Shutter Island, a mental hospital for the criminally insane. Marshall Edward Daniels (DiCaprio) and Chuck Aule (Ruffalo) are sent there to investigate the disappearance of a patient, Rachel Solando (Emily Mortimer). The chief psychiatrist, Dr. John Cawley (Kingsley) seems to be friendly towards them. Solando’s psychiatrist, Dr. Sheehan, has left for the mainland. Daniels loses interest, but after a storm prevents their return for a few days, Daniels decides to investigate.
Daniels begins to have migraines and is often disturbed by dreams of the Dachau concentration camp, and of his wife (Williams), who was killed in a fire, started by a certain ‘Andrew Laeddis’. Daniels later tells Aule that he came to the island mainly to confront Laeddis, who is also a patient there.
As events on the island get weirder, Daniels soon realizes that he is trapped on the island and that everyone on the island is playing against him. Daniels uncovers an explosive secret about the island, but he discovers something about himself that is even more shocking. Does Daniels get to the mainland and blow the secret of the island, or is he stuck there forever? Does he confront Laeddis or does he find an even more disturbing truth about Laeddis? Watch Shutter Island and find out!

This is Scorsese’s fourth collaboration with DiCaprio, so clearly, he has taken a liking to DiCaprio’s acting. DiCaprio does not disappoint the viewers, and neither does Kingsley, who plays his character very well, displaying the same calmness he did while portraying Gandhi. Michelle Williams and Ruffalo haven't acted well and are kind of log-faced in the film.

Scorsese has done well to provide twists and turns periodically. With more twists, the viewers eagerly wait for the end, and Scorsese has done very well to tie up almost all loose ends. There is some horror content in the film, though not much. The horror comes not just from some bloody scenes, but also from the patients on the island. The dialogues have to carefully heard, or else one may lose an important clue here and there. There are some well-hidden clues in the film, which give a hint about the ending, so a careful watch is required. Scorsese himself said that the reason this would be his highest grossing film, was that people would watch it twice to see the clues they missed the first time. (source Wikipedia)

This film received largely mixed reviews upon its release. However, I found the film quite fast-paced,except for a few factors about the story. While Scorsese has provided with an ambiguous ending (which is not there in the book), he still hasn't answered a few questions. Of course, analysts on the Internet have provided satisfactory answers, but yet there are a few holes. Another negative factor is the far-fetched plot. By the time you understand the ending (after watching the film n number of times), you think, ‘All that build-up for such a plot?’ So you may be slightly disappointed.

Yet, Scorsese and DiCaprio provide the viewers with another good thriller. Make sure you listen to all the dialogues well, and keep a close look on the screen to spot clue. If you want to enjoy it fully, keep away from spoilers. A good story, good acting and a great ending make this film a solid entertainer.