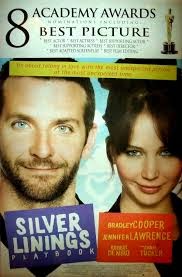 David O. Russell puts together an ensemble cast featuring Bradley Cooper, Jennifer Lawrence, Robert De Niro and Jacki Weaver in the lead roles, with Chris Tucker and Anupam Kher in the supporting roles. Though slow-paced in the beginning, Russell does well to take on a rare topic, and convert it into a nice rom-com. This is the first film since 1981 to win Oscar nominations for all four acting categories, and it was nominated for Best Picture and Best Director as well.

Pat Solatano, Jr. (Cooper) is suffering from bi-polar disorder, and has just been released from a mental health facility. He wants to get back together with his wife, Nikki, who is separated from him. His father, Pat Solatano, Sr. (De Niro) is a bookie, who is very superstitious. Pat Jr.’s mother, Dolores (Weaver) just wants to keep both father and son happy. Pat’s policy is called ‘excelsior’ – where he decides to find the silver lining in all his experiences. Pat is introduced to Tiffany Maxwell (Lawrence), a recent widow, who knows Nikki. Pat asks her to give his letter to Nikki, and Tiffany asks him to be her dance partner in a competition in return. As the story progresses, an unusual bond begins to form between Pat and Tiffany, and soon, the lives of all the characters being to change...

The first one hour is devoted entirely to building the characters and giving a strong foundation for the plot. The story does not progress at all, but just gets ‘denser’. It kicks on in the second half, with few twists here and there, and the ending is quite good. But what make Silver Linings Playbook different are the topics it deals with – bi-polar disorder, football fanaticism, dance etc, with bits of comedy in between as well. It may not be the usual love story, but it is an unorthodox love story made realistic. Considerable time is given to develop these themes, and hence, the story might seem slow. There are few memorable lines of dialogue in the film, including this by Pat: “You have to do everything you can, you have to work your hardest, and if you do, if you stay positive, you have a shot at a silver lining.”

Cooper and Lawrence were magnificent as Pat Jr. and Tiffany, respectively. This was Cooper’s chance to show the world that he was fit for more serious roles, unlike his character of Phil in The Hangover trilogy. His portrayal of his disorder is quite convincing. Jennifer Lawrence, at 21, is one of the best actresses among the others of that age. At one moment she is happy, then sad, then angry, then seductive... all these emotions appear and flow so smoothly that one just has to admire her. While Cooper and Lawrence deserved Oscar nominations (the latter won), De Niro and Weaver certainly didn’t. De Niro has done well, but his performance is not Oscar-worthy. Weaver’s acting was pretty ordinary – nothing great about it. Russell’s next film, American Hustle also received nominations in all the acting categories, but there I felt that all four actors deserved them.

But David O. Russell overcomes the film’s flaws with his superb direction, along with support from a strong ensemble cast. Cooper and Lawrence have given what may be their career-best performances, while De Niro has also done a fairly good job. The story may seem awkward, with its unusual themes like bi-polar disorder, superstition etc, but I like the fact that Russell chose to direct a different type of love story. It might seem slow, but in the end you have a clean romance film.