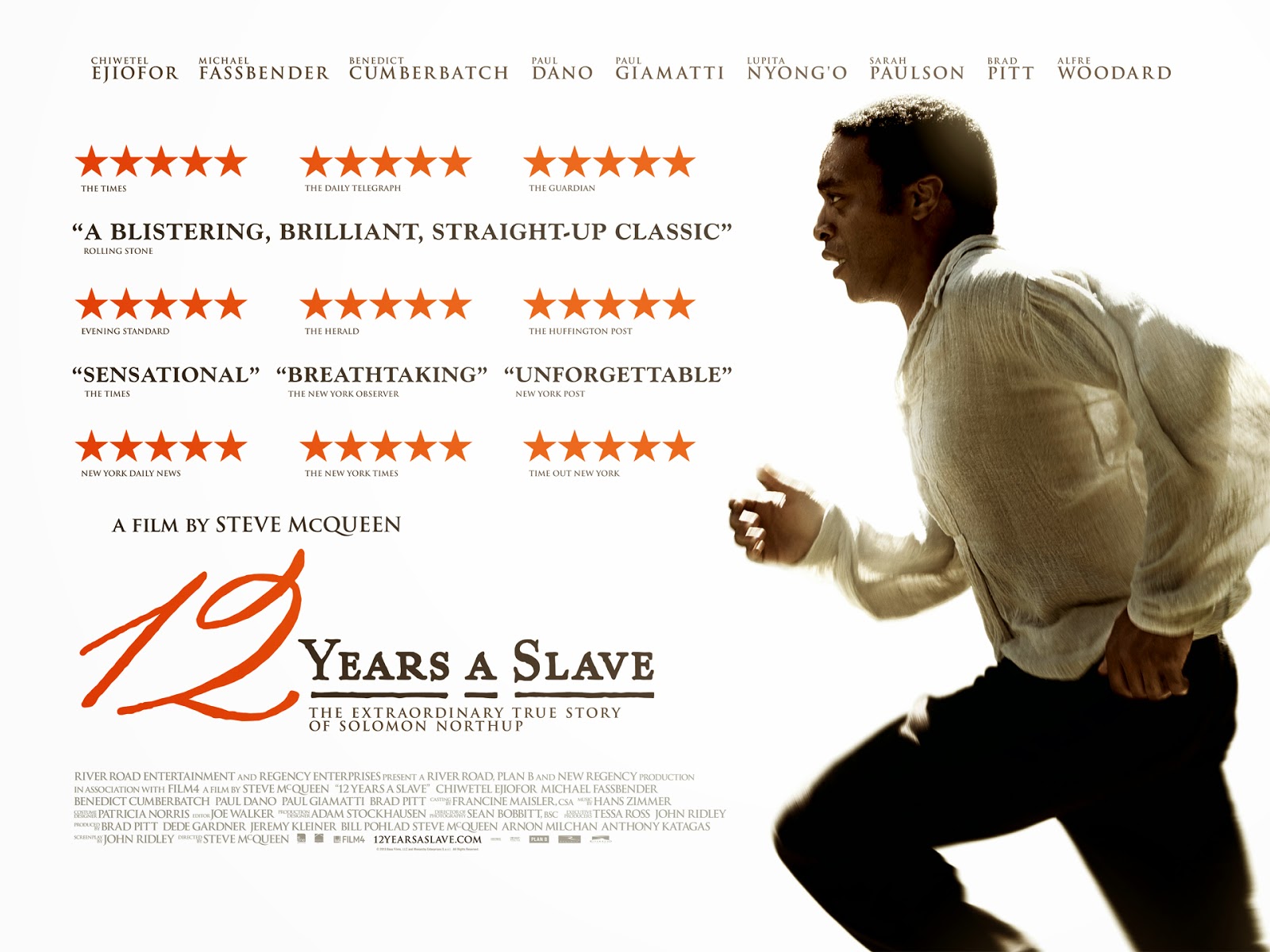 The winner of the Academy Award for Best Picture of 2013 (the first film made by a black director to win the award), Steve McQueen’s 12 Years a Slave is one of the best films I have seen, and is also perhaps the best picture ever made about slavery. Starring Chiwetel Ejiofor and Michael Fassbender in the lead roles, the film is based on the true story of Solomon Northup, who wrote a book about his slavery (with the same title) in 1853. As one of my readers wanted me to review this film (and since I was able to watch it only now), here it is!

1841 - Solomon Northup (Ejiofor) is a free black man living in New York, who is extremely talented in playing the violin. Two men approach him with a two-week job offer, which he accepts. Next morning, he finds himself in chains; he realises that the two men had drugged him and had sold him as a slave. He is shipped to New Orleans, where he works under William Ford (Cumberbatch) – a plantation owner – who appreciates Solomon’s skills. He is then transferred to the control of Edwin Epps (Fassbender), a cruel man who believes that punishments are sanctioned by the Bible. The rest of the film covers Solomon’s experiences in his twelve years of slavery.

Ridley’s screenplay is a faithful copy of Solomon’s book (I’m guessing this from his acceptance speech at the Oscars), and McQueen uses the story to do what he does best – gives such an experience that after watching the film, you will really feel the harshness of slavery. The film is far from a pleasant watch, but that’s what makes it so powerful. Some scenes are really brutal, like the one where Solomon is lynched and the scene where Epps lashes Patsey (Nyong’o), a young female slave. I appreciate McQueen for not worrying about the public reaction and going on with his decision to portray in a brutal but honest manner (and that’s what he is known for anyway).

Ejiofor, like McConaughey, was also unheard of, before this film. His acting was solid, and in some scenes, he does so well that we empathise with him. He also won the BAFTA award for his performance. Michael Fassbender has been part of all three of McQueen’s feature films, and his Oscar nomination (his first) was justified. He really brings out the cruel nature of Edwin Epps. Lupita Nyong’o is impressive in her debut role, though her screen time is fairly short (she won the Oscar for Best Supporting Actress). Others like Benedict Cumberbatch, Paul Dano and Brad Pitt (who makes a small cameo towards the end) have given good performances as well.

The period settings and the costumes are authentic. Zimmer’s score is excellent, as is the cinematography. But, as I said before, McQueen specifically captures most of the violence in the camera; so, watch out for some unpleasant scenes. Though it is a great film, 12 Years a Slave is not a film about which you can say, “I’ve seen that film loads of times!” It is a film whose one watch leaves an effect so strong, that it will be a while before you can recover from it. McQueen has created a masterpiece, and he did it with full commitment and cooperation from Chiwetel Ejiofor, Michael Fassbender and Lupita Nyong’o, and the rest of the crew.

So, while I still think Gravity is the most enjoyable film, and the best in terms of technical aspects, I now feel that 12 Years a Slave certainly deserved the Oscar for Best Picture more than Gravity. But I think Cuarón deserved Best Director, because he made a masterpiece out of a simple one-line story, while McQueen had a strong story to support the film. But if you ask which is better, I would say that both are equally brilliant, each with their own positive factors.