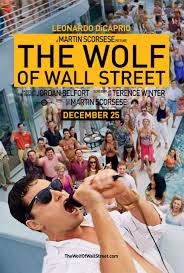 The expectations were high, and result finally came. The Wolf of Wall Street is the fifth collaboration between Martin Scorsese and Leonardo DiCaprio. This dark-comedy biopic tells the tale of a Wall Street stockbroker, Jordan Belfort. DiCaprio got his fourth acting nomination at the Oscars, while Scorsese got his eighth Best Director nomination. The film did not match my expectations, but it was still a fairly good entertainer.

The main character is Jordan Belfort (DiCaprio), who narrates the story of how he became rich. At 22, he goes to Wall Street, where he works under Mark Hanna (Matthew McConaughey), a person whose policies are “Screw the clients” and “It’s all about how to take the money from your client’s pocket, into your pocket.” He advises Jordan to lead a life filled with sex and drugs. Barely a month into the firm, Jordan loses his job after a stock market crash. He begins to deal in penny stocks, and his talent of selling wins the admiration of others. He soon starts his own film, with the help of his neighbour Donnie Azoff (Hill) and several friends, and names his firm Stratton Oakmont. Yet, in the company, only dirty money is made. The rest of the story tells how Jordan “makes so much money that he doesn’t know what to do with it”, and how it eventually leads to his downfall.

I find it hard to believe that this is based on a true story, because well, there is no real story. It starts out well, and then it is only parties followed by revelry followed by celebrations again. In between there is taking of drugs, and taking of more drugs again. The actual crux of the story is very less; there was absolutely no need of making a 3 hour film. There is lot of sexual content in the film, and I have never found those scenes as absolutely necessary in any film. Moreover, had most of those scenes been cut, the film could have been a good 30-45 minutes shorter. The other important question which you might be thinking is, ‘Is it necessary to know about stocks while watching the film?’ DiCaprio answers that (as he often talks into the camera) by saying (about some stock-related terms), “…I know you are not following what I’m saying anyway, that’s normal.” Yet, a little amount of knowledge is needed, at least if you want to know how Jordan makes money. The film has plenty of comedy. The scene where Jordan sells shares of a worthless company for $4000, and the scene where Hanna and Jordan have lunch are some of the funniest ones.

The script is pretty good. As I have said before (in my review of The Iron Lady), making a biopic is tough, because you have to make it interesting to the audience. Terence Winter manages to do that, though I again feel that the film could have been much shorter. The dialogues are brilliant, and there are lots of catchy phrases. But, as usual, the profanity is never less. In fact, The Wolf of Wall Street is now officially the film with the most number of swear words among all English films! But remove those swear words, and the underlying dialogues are pure awesome.

Now the most important part of the film: the acting. DiCaprio is simply stunning in this film. Most of the time he is partying or enjoying with women, but he still has done extremely well to express happiness, sadness and anger. The film is more or less a one-man show, with DiCaprio taking up atleast 165-170 minutes of screen time. The scene where he goes from the club to his home, after taking an overdose of drugs, in one of the best sequences of Leo’s acting among all his films. Jonah Hill has acted quite well. Margot Robbie’ acting is poor most of the time, and gets good only at the end. But more than Hill, I liked McConaughey’s acting: he gets only 10-15 minutes on screen, but makes the most of it. His comical facial expressions, catchy dialogues (and moreover his idea forms the basis for the whole story) and his ‘song’ made me like his character and acting very much.

To conclude, Martin Scorsese’s The Wolf of Wall Street is a good entertainer. Winter’s script and the great acting power the film. However, I don’t feel that the picture deserved a nomination at the Oscars. Yet, DiCaprio is at his best, and he deserves the Oscar in my view. The dialogues are vulgar, but excellent. The film could have been about 30 minutes shorter in my view, but once you start watching, very rarely are you bored.